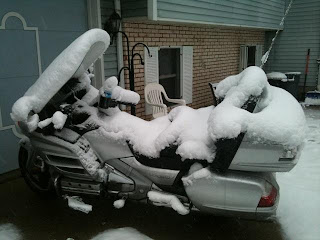 Now I remember why I was in such a hurry to get back. I wanted to beat THIS storm home.

Hmmmm... I could have used this storm as an excuse to star there longer...

And, No, I do not typically leave my bike outside the garage for no reason. But the garage is currently the woodworking shop, so I need to put the bike back in storage for a few weeks.
Posted by Vince Herman at 7:04 AM No comments:

Well, that concludes another trip to Daytona Beach.
Highlights include great weather, dinner with John and Rae, and the great group of guys who helped me fix my bike.
The weather at Daytona was fantastic. The weather on the trip down included 10 hours of rain. At least it was wet and not frozen!

Looking forward to next year. I have to pick out some artwork to put on the bike. It would be nice if I could arrange to trailer bikes down, so that Marion could ride too. Maybe I will pull hers behind mine. Who knows?
Posted by Vince Herman at 9:39 AM No comments:

But I am home. More details tomorrow with a wrap-up.

Oh, I earned the Iron Butt award a third time!
Posted by Vince Herman at 8:47 PM No comments: 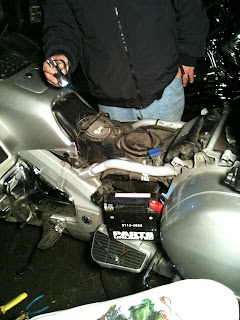 Dinner at Maria Bonita's was fantastic.

Jump on the bike to run back to the hotel to pack and CLICK. I hear the starter solenoid click, but the motor does not even try to crank over. Lights very bright. Brand new battery. Terminals clean and tight.

I called John and Rae, but they are an hour away, and heading towards Orlando. He suggested I push start it to get to the hotel. That worked on a warm engine, but I am not so confident about it getting me all the way back to Ohio.

I was talking to some of the other riders here at the hotel, and when they heard me talking about difficulties with my Goldwing, they said "You want to talk to Pat". Actually, first they made jokes about rice and chopstick and then said Pat. Pat, it turns out, works on Goldwings.

Out come the tools, and he starts testing things. Battery fully charged. Relevant fuses intact. Output from Relay A fine. Moving the starter and trying to start again gave no joy (in case it was bad brushes on the starter) Relay B is buried fairly deep. Not quite open hear surgery, but it sure felt like it, in the dark, in a hotel parking lot! 3 hours later, (and a lot of good banter between the Harley guys and the Honda guys), Pat identified Relay B as faulty. Wiggling the terminals enabled the bike to start. He made sure I knew which terminals needed jiggled in case it fails on the way home, and we buttoned everything up.

I tried to pay for the next beer or pizza run, but they all refused. Something about helping me out of the goodness of the heart.

Moral of the story, if you are going to have your Honda break down, do it in a hotel parking lot filled with Harley riders who are expert Honda mechanics.

Thanks, Pat and the rest of the crew. Ride safe.
Posted by Vince Herman at 8:13 PM No comments:

Did someone say Shopping?

Having a blast. Still have not found a new denim jacket. It is not a must have but I figured that while I am here, I can look.

New patches for the old jacket. Some souvenirs and such.

Puddles of drool looking at all the trick bikes.

I have a Mexican dinner planned for tonight. Come back early, pack, and roll out tomorrow morning.
Posted by Vince Herman at 3:05 PM No comments: 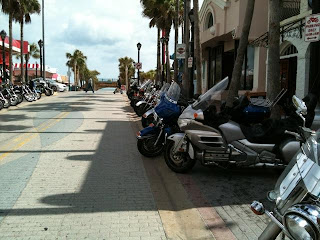 My bike on the right. Main street, Daytona Beach.

Shopped for hours. Still want to find a new jacket.

Went out to dinner with John and Rae. Great steak. They sure can find awesome restaurants anywhere!

2 nights at this hotel. A Whole day of shopping, and then a good rest before the trip back home.
Posted by Vince Herman at 4:43 PM 1 comment: 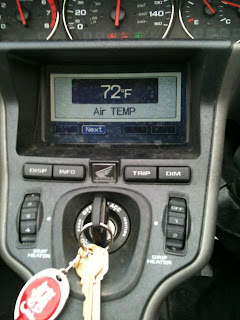 This morning, about to leave, I could not help dwelling on the fact that it was going to be 10 solid hours of rain. Warm, but rain.

Then it hit me. WARM! Warm enough to take the direct route! The 77 route cuts a lot of time off, and it was warm enough to avoid the mountain snow storm risk, and avoid most of the heavy rain.

Now I am at a hotel in Georgia, 240 or so miles away from Daytona.

A fattening burger at the bar next door, a bit of TV and hopefully Marion will call to say how much she misses me.

A nights rest, and then off to the festivities tomorrow.

Vince Herman
I have a wife (Marion), 2 grown kids (Rob and Molly) and life is good. By good, I mean mostly go to work and pay bills, but I DO get to ride my bike, play games with friends and enjoy RC activities with my family and other club members (and Marion!).